This is so easy, after taking my shredded Lamb, Ginger & Prunes out of the slow cooker on Tuesday morning I washed it quickly and also burnt my finger and filled it back up so dinner was ready when I got home.

After cutting another finger on Monday - having 5 tears on my hands from CrossFit and now burning my right pointing finger my hands are so terrible. As I've said before I'm lucky I have a boyfriend as I have the hands of a lumberjack !

James had complained last night that dinners were getting too late. Fair enough, anything past 8 on a weeknight is probably too late, but in my defence some days training finished at 7.30 so by the time I got home I was cooking like a mad woman to get dinner done by 8.30.

I was so smart yesterday - preparation - and *almost* complete meal in a pot - with minimal washing up - another win. I put this is the slow cooker in layers. In my head I said layers just like Shrek did.

First Layer:
For your pork
Method: 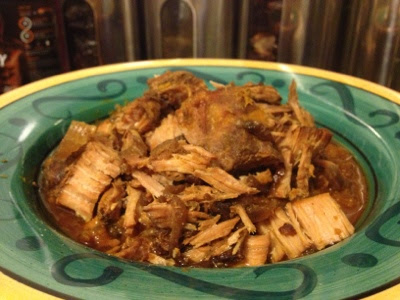